The Lesvos camp was formed in 2016 after more than 46,000 refugees had reached the Greek Island, and, as they sought asylum, the Greek government contained the people in camps located at five different islands. Moria is the largest of the camps.

Just, who teaches Intro to Computers at SPC and is the Senior Vice President of Learning Innovation at KnowBe4, traveled to Greece to teach English, help set up a library and teach computer skills during his two-week stay at the camp. He said the conditions there were primitive.

“It’s very overcrowded and more people are coming in every day,” Just said. “There are families with children and older people, as well. People are living in small tents in between the ‘containers’ because they are full.”

In addition to the English and computer classes, The Boat Refugee Foundation offers many other services to the refugees, including a medical clinic, a school, a stress relief class and mental health workshops.

“There are experts from various fields there helping out,” Just said. They are some of the best people I have ever had the opportunity to work with.”

The refugees come from Syria, Afghanistan, Eritrea and many other war-torn countries, and though they bring their own expertise, the need for education and enrichment is vital. Just noted that he met many extraordinary people at the camp, like Ousmane, an engineering student who escaped war and devastation in North Africa.

“His native language was French,” Just recalled. “He volunteered in our library and was always studying: English, Greek, and anything he could get his hands on. He hopes to go back to engineering school once he gets out of the camp. Any country would be better for having someone like him in it.” 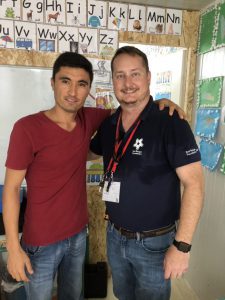 To find out more about volunteering at a refugee camp or making a donation, visit the Boat Refugee Foundation website. Just said he would recommend the experience to any and all.

“It is such a fulfilling experience because you are working with great people from all over the world,” Just said. “They need our help because these people have lost everything,” Just said. “And they are really appreciative of our efforts. Several people wrote me notes of “thank you” and too many people said thank you to mention. It’s really rewarding, and there is a lot to do to help with the programs besides teaching class, so it’s great experience. I highly recommend it to SPC students and faculty.”